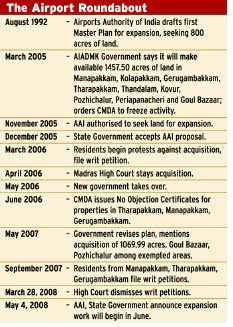 CHENNAI: Even as the Kancheepuram district administration expects to complete land acquisition in a month to allow the airport expansion project to start in June, for the residents in the affected areas, many questions remain unanswered.

Local registrar offices are still allowing the buying and selling of property and the registration of titles in these areas despite a July 9, 2007 Government Order notifying 1,069.99 acres for acquisition at Tharapakkam, Manapakkam, Kolapakkam and Gerugambakkam. The Chennai Metropolitan Development Authority (CMDA) was directed to freeze building activities in these areas.

“If the government is going to acquire the land, the registration offices should know which property is going to be affected,” says S. Tamilselvan, a Tarapakkam resident.

While some residents have received notification from tahsildars that their land is being acquired, many in this area have not. “And as they are still allowing registrations here, we are not sure whether we have been exempt from the plan or not,” he said.

In a reply to a petition filed by a resident under the Right to Information Act, Pammal Registrar’s Office confirmed that property in parts of Tharapakkam marked out for acquisition were still being registered as late as December 2007. When contacted, an officer said the registrar was yet to receive any government notification about the airport expansion. As such, buying and selling of property was still permissible, and the land acquisition proposal would not figure in encumbrance certificates.

Lack of transparency and alterations in the State Government’s land acquisition plan have left many residents angry and unsure of the fate of their homes. The residents are also aggrieved because they received No-Objection Certificates from the CMDA as late as June 2006, only 11 months before the Government issued its order identifying the land.

In June 2005 though, the CMDA announced freezing of all building activities in Manapakkam, Kolapakkam, Gerugambakkam, Tharapakkam, Thanadalam, Kovur, Pozhichalur, Peripanicheri and Cowl Bazaar, when the AIADMK Government first marked out 1,457.50 acres.

The State Government and the AAI have since drastically changed the plan, leaving the residents bitter about the lack of transparency and clarity in the whole exercise.

“If an NOC given by the CMDA itself can be rendered invalid in less than a year, what is the point of getting approval? There has been no transparency in the process,” said a Manapakkam resident.

A Gerugambakkam resident said her family had spent all their savings on buying the property in February 2006. “We had heard about the earlier plan, but we approached the CMDA in March 2006, looked at the survey numbers and were told we were outside the airport expansion plan.” Her family started construction by the end of 2006.

“When we heard about the Government Order [in May 2007], we stopped construction of our house, and it still remains unfinished,” she said. “But we are still forced to pay Rs. 14,000 every month as EMI to the bank, though construction has stopped. We are in a bind, and our dream still remains unfulfilled.”

What is happening in Tamilnadu? There is a news item to the effect that the Honourable Chief Minister does not want to displace the residents and he is bent on formation of Sriperumbudur Green Field Airport with a view to avoid sufferings of the people. At the same time, the land acquisition agency, viz., The Collector of Kancheepuram District holds a quasi judicial inquiry into the matter concerning the objections of the objectors i.e., the owners who are likely to be displaced. Is the news item concerning the Chief Minister's Statement and the other news by the Transport Secretary which was flashed in Times of India about a week ago wrong? I am at a loss to understand as to what is happening here in Tamilnadu. When the Green field Airport is likely to come up in 2015-1016, where is the need for the parallel runway as the extension of the existing runway will help ease the air traffic till such time. MAY GOD SAVE US ALL.